Jay Leno and the CyberTruck 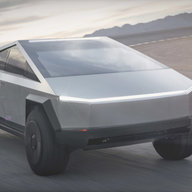 So I think a majority of us have seen the videos and photos of Elon and Jay driving around town in the cybertruck filming for a new episode of Jay Leno's Garage. Now It's just a question of how long does it take them to edit these episodes and how many episodes do they have queued up. What do you think? In February? Later? Personally, I think that we will see this new episode sometime in February or March. Keep in mind a new video is release every sunday on their youtube channel!
Advertisement
You must log in or register to reply here.
Share:
Facebook Twitter Reddit Email Link