Kelly Blue Book is getting in on the Cybertruck craze!

I don't think there is a vehicle that has had so much coverage, buzz, comparisons, following, anticipation(cue Carly Simon's 'Anticipaton') in all of automotive history.

Now Kelly Blue Book is writing about it : 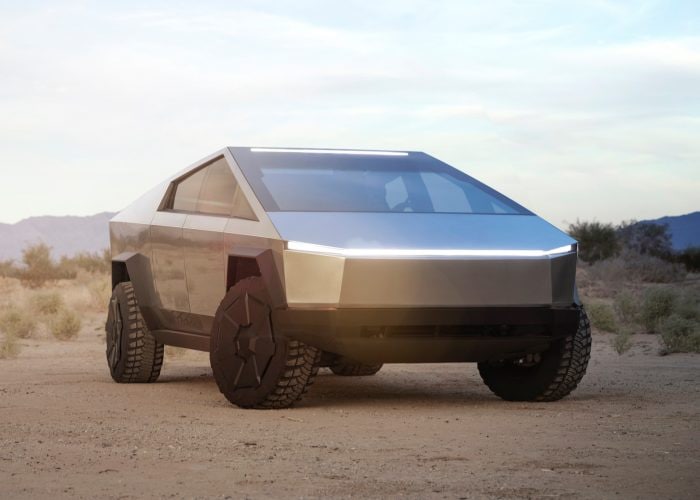 It took Tesla barely 72 hours to capture 200,000 advance reservations for its new Cybertruck, or so it claims, about four times what it expects to be its annual production volume. Whether those $100 deposits translate into sales remains to be seen. Another factor to consider is competition the new pickup will face when bows in two years.

At least seven automakers – including established manufacturers Ford and General Motors, as well as start-ups like Rivian and Bollinger – also have announced plans to offer electric pickups. Others makes hint they could follow.

Ford has already teased what’s coming. It released a video showing a prototype hauling 10 double-decker rail cars and 42 conventional F-150 pickups. That’s a load of over 1 million pounds.
GM says it will revive the Hummer brand with an electric pickup sold through GMC. The Hummer EVpickup promises 1,000 horsepower and a towing capacity of more than 11,000 pounds. The new truck will be built at GM’s Hamtramck-Detroit assembly plant.

Among new entrants, suburban-Detroit start-up Rivian plans to bring out a pair of electric trucks. The R1T pickup, and R1S sport-utility vehicle boast 400-mile ranges, and 11,000-pound of towing capacity. The performance will rival a Tesla SUV with Ludicrous Mode, an estimated 0 to 60 of 3 seconds, with a top speed of 125 mph.
Bollinger, another Detroit start-up, is targeting the heavy-duty Class 3 pickup segment. Its boxy B2 challenges Ford’s F-350 line, with a payload of 5,000 pounds and a towing capacity of 7,500 pounds. It boasts a GVW of 10,000 pounds.

One of the newest entrants is Lordstown Motors, an affiliate of Cincinnati-based Workhorse. It recently purchased GM’s abandoned Lordstown, Ohio plant to produce a heavy-duty electric pickup.
Other new entrants include both Detroit-based Hercules Electric Vehicles and Atlis Motor Vehicles, a Mesa, Arizona start-up. Meanwhile, both Nissan and Fiat Chrysler’s Ram brand may also get in the game.

Even if some of the start-ups falter, things could soon get crowded. Rivian and Bollinger plan to go into production in late 2020. Tesla, Ford, and GM aim to follow a year later. And that raises questions about whether they will find ready buyers.

On the positive side, Americans purchase about 2.5 million full-size pickups each year. In fact, three models dominate the U.S. sales charts. Ford’s F-Series has been the top-selling vehicle of any type for three decades. It’s followed by the Chevrolet Silverado and Fiat Chrysler’s Ram truck.

While there is likely to be enough room in the market for some battery-electric trucks, “the likelihood of all the new entrants grabbing enough sales to make a business case is questionable,” said Sam Abuelsamid, principal analyst with Navigant Research.

Tesla, Abuelsamid added, could be one of those to pull it off by banking on its strong following. Cybertruck will undoubtedly appeal to those who already own a Tesla. The EV maker’s challenge could be trying to generate demand among existing pickup owners, especially commercial users.

Tesla – like the other start-ups — has one big disadvantage: a limited dealer and service network. This downside may offset potential operating maintenance cost savings. It already has problems servicing existing owners who are far less likely to abuse their sedans and SUVs than pickup drivers. That could give an advantage to established automakers like Ford and GM, said Abuelsamid.

Among the wave of battery-electric vehicles coming to market in the coming years, an assortment of established and start-up automakers are targeting the full-size pickup segment. Lower operating and maintenance costs could be a big plus. But the question is whether traditionally conservative and brand-loyal truck buyers will be willing to take the risk, especially with new and unproven entries. For Tesla, in particular, success may depend on tapping first-time, non-traditional truck buyers.

Well they got success by tapping this guy.

Established dealers with service networks is how money is minted by the dealers. Routine maintenance, warranty “service”, collision repair of body on frame ICE powered vehicles are very profitable together with coownership of Enterprise rental franchises as the vehicles being serviced stack up in parking lots behind service bays. All this stuff is unnecessary for Tesla for the Cybertruck with a little expansion of mobile repair/replacement operations.
All you really need most of the time is a local tire store and model specific local mechanic.
Advertisement
You must log in or register to reply here.
Share:
Facebook Twitter Reddit Email Link

Getting your "Green On" in your Cybertruck and Tesla EV's

Poll: Are you getting comprehensive insurance coverage on your Cybertruck?
2

Supercar Blondie is getting one too!

Cybertruck takeaways from AI Day: coming in about a year & getting upgraded AI hardware for FSD
4 5 6