FLIR res is pretty rubbish atm, and flying is easy compared to driving. Crashing into things is the opposite of trying to avoid crashing. Really not the same.
Technology is a lever on the environment to enact our will. Use it wisely and sustainably to positively change our future.

He has opinions on a lot of things, but what he knows is manufacturing.

You need to understand that when you watch his videos.

FSD is designed to operate on roads designed for human drivers. While FLIR might give some details normal vision doesn’t, it will also miss things which normal vision does see. Since the roads are designed for human sight that range of vision needs to be covered. Maybe cameras that cover both infra and normal ranges would work, but you gotta have the human visible spectrum covered 100%.

FSD always has the potential to do what humans do in low visibility conditions: Slow down. That’s what any other traffic on the road is going to do.
OP
OP

At Tesla's AI Day event last summer, Elon answered some questions during the Q&A portion of the event that revealed Tesla's plans for FSD hardware.

Elon informally announced that Tesla is already researching the next major hardware revision for full self-driving. Elon said that he expects the current hardware in today's vehicles to be capable of "super-human" driving, but Tesla will continue to update their cars to have the most powerful hardware available.

Elon guessed that Tesla may release FSD hardware 4.0 with the introduction of the Cybertruck. Since the Cybertruck won't be released until the end of this year at the earliest, we may even see new hardware before its arrival, although this is unlikely.

In another question related to new hardware, Elon also said that Tesla is looking into new cameras. He was clear that the current cameras aren't a hindrance, but if Tesla can do better, then they will.

New Camera
According to Chris Zheng on Twitter, who has connections with some Tesla suppliers, Tesla is planning to use Sony's new IMX490 automotive sensor in their upcoming hardware 4.0 revision.

This new sensor offers many benefits over the current sensors that Tesla uses in their vehicles.
The new sensors support a much higher resolution of 2896x1876. That's 5.4 megapixels compared to the 1.2 megapixels that Tesla's current front-facing cameras support.

At more than four times the resolution of current sensors, these new sensors will allow Tesla to more accurately detect objects that are required for FSD.

Detecting road edges and lane markings that are further away are especially difficult. Due to the angle of the road and the current image resolution, Tesla often has to make assumptions based on just a few pixels.

The increased resolution will offer a more detailed image and should improve the accuracy in these situations.

The new wide-angle sensor may also allow Tesla to drop the number of cameras used in the front-facing module. Due to the higher resolution in these sensors, Tesla may be able to use this wide-angle sensor to interpret objects that previously required the use of the standard or telephoto lenses before. This may allow Tesla to reduce the number of cameras that are required in the front of the vehicle from three down to two or even a single lens.

The new camera sensor also supports HDR shooting at 10 bit and 40 FPS, offering better contrast and richer colors. It's not clear whether Tesla would take advantage of HDR as it would require more power to process, but it's something Tesla may consider depending on the compute power available.

More importantly, the new sensor will also support LED flicker mitigation. Camera sensors often have a hard time capturing the light emitted from LED lights in a constant fashion. Since LEDs are widely used in electronic signs and traffic lights this will be an important feature and should make it easier for Tesla to interpret such signs.

Tesla is working closely with Samsung to produce their next-generation chips that will be used in FSD hardware 4.0. Tesla will likely launch updated cameras at the same time they introduce a new FSD computer.

It makes sense for Tesla to introduce this new hardware in a new model first before retrofitting new camera modules into existing models.

Note: Not mentioned in this article is Samsung will also provide cameras for the Cybertruck.
OP
OP

Does anyone know who makes the current cameras for Tesla FSD and what are the specs?

That's another vote for making FSD's cameras more like humans: Our eyes average the light over a longer time than the time-slices we can perceive motion at. But cameras work the opposite, with discreet segments of time before resetting at 0.
Aptera Reservation 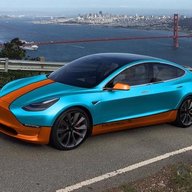 I didn't click on the video but is this "E for Electric"? If so the guy is biased against Tesla and the title seems click-baity.

When Sandy was on the 3 tour last year, someone gave him a ride in an earlier version of FSD and was impressed.

"Cybertruck Quad-Motor Plaid Plus". It rolls off the tip of your tongue and into your heart.

Albern said:
I didn't click on the video but is this "E for Electric"? If so the guy is biased against Tesla and the title seems click-baity.

When Sandy was on the 3 tour last year, someone gave him a ride in an earlier version of FSD and was impressed.
Click to expand...

The host kind of annoys me, but in the Munro episodes his VW bias kind of works because he makes a decent foil to Sandy. He had a good episode on the VW Van as well.

His yelling (or at least over enthusiasm) turned me off.
Aptera Reservation

Summon is klunky, autopark is slower than my grandma, phantom braking is real. The beta is much better, and is advancing quickly, but...it's just a beta out to a few thousand people.

Summon is klunky, autopark is slower than my grandma, phantom braking is real. The beta is much better, and is advancing quickly, but...it's just a beta out to a few thousand people.

When I reserved my Cybertruck I didn’t bother with FSD because it seemed like a waste*. Likewise on my Model Y.

The big question is whether it will ever be more than a really interesting experiment. It *seems* like it’s turning a corner. It almost feels like convergence in calculus. Every year FSD gets better, but is always just a little shy of good enough.

Munro’s assumption is part of the problem with FSD is the cameras they use, but I don’t think that is the limiting factor here.


* In retrospect maybe I should have clicked that button so I had the option, but water under the bridge.

I wouldn't have bought what was available in 2019 for $7k. But in an optional reservation... You bet I was clicking it.

I see what you did there


Ogre said:
but I don’t think that is the limiting factor here.
Click to expand...

I see what you did there, too


Ogre said:
In retrospect maybe I should have clicked that button so I had the option, but water under the bridge.
Click to expand...

I selected the FSD option, but I will probably decline it. The subscription model seems like a better choice.

Crissa said:
I wouldn't have bought what was available in 2019 for $7k. But in an optional reservation... You bet I was clicking it.

At the time I thought I would be stuck with buying it if I clicked on it.

I wound up dropping another $100 on a second reservation later on to lock in FSD pricing at $10k. That one is 100s of thousands later in the queue though. What I should have done was lock in FSD on that primary order too.

Summon is klunky, autopark is slower than my grandma, phantom braking is real. The beta is much better, and is advancing quickly, but...it's just a beta out to a few thousand people.
Click to expand...

The Past, Present, and Future of EV’s (Sandy Munro Video)