I've been wondering what you'd have to spend if you wanted the performance and features of the Cybertruck but decided you couldn't live without the internal combustion engine.

He should have made this video in clown attire/makeup. I liked his other video. You can't tack on an a 81K vette for the acceleration. The Super Duty gets closer to 13 MPG (I'm told). Lariat is fancier trim package. $10K+ for generator, ramp, and compressor?

Are repair costs to the Tesla actually lower considering every non-minor accident is a bent support structure?

Did the aftermarket air suspension get you 16 inches off ground clearance. I don’t think so.
OP
OP

bfdog said:
He should have made this video in clown attire/makeup. I liked his other video. You can't tack on an a 81K vette for the acceleration. The Super Duty gets closer to 13 MPG (I'm told). Lariat is fancier trim package. $10K+ for generator, ramp, and compressor?

Are repair costs to the Tesla actually lower considering every non-minor accident is a bent support structure?
Click to expand...

Hmmm, I think I'd look good in clown make-up. Something to think about!

Remember that my mileage comps were done with a diesel. I drove a F250 gas for 5 years. I dreamed of 13 miles. I averaged around 12.1 and I didn't do a lot of towing. We have an F550 with the 6.7L diesel in our fleet and it tows probably 35% of the time. It gets around 15-17 mpg. I think 16 mpg is pretty reasonable for a 6.7LDiesel without factoring in towing. I know guys that say it's closer to 18 but a lot of that comes down to how you use it.

Unless Tesla does something very different then their other vehicles, the interior of the Cybertruck will be much closer to a Lariat version than the next one down, the XLT. The XLT only has cloth seats, very basic dash features, simple environmental controls (basically heat/cool, mode and fan settings). No power seats for passengers and only power sliding for the driver (backrest is manual, no lumbar and no height adjustment) no heated or cooled seats, no infotainment system and very minimal advanced driver assist features. We won't know for sure until it comes out, but everything I've seen about Tesla styling, comfort and technology features puts it into at least the mid-level luxury category which makes it a least comparable to the Lariat trim package.

There's no way you get 0-60 of 2.9 seconds (outside of another electric truck and that's also TBD) without having a second vehicle. The goal of the video was to figure out what you'd have to pay to get the performance of a Cybertruck without spending any money with Tesla.

The largest part of my 10k number was the Adaptive Air Suspension at about 4k. Those things are EXPENSIVE. I put all my numbers and sources in the spreadsheet linked to the video. I had an aftermarket outfitter tell me my number for that kit, installed was actually low. IDK. I haven't gotten to the point with my Tacoma that I've been aggressively getting quotes for aftermarket suspensions.

I do know that in the overlanding community it is very common to spend well over 10k doing the kind of upfits that come standard on the cybertruck.

Regarding your question on the repair costs, I would recommend you watch the 'Autoline After Hours' episode with Sandy Monroe where he spoke extensively about the pro's and con's of the exoskeleton design. The takeaway on repairs is that cosmetic ones will be really easy but if the frame gets bent, it's a total loss. So your point is valid as far as it goes. That said, he said it's the same issue with most modern vehicles because they use unibody construction. He did say that you'd have to have a hell of a hit to bend it and that in cases like that, you'll probably be pretty happy to have the envelope of protection that it provides as compared to worrying about the frame.

So, If you're prone to bending the frames of your trucks, you might want to stick with standard truck.
Last edited: Feb 21, 2020

I bought an iMac Pro (pre-ordered in 2017) because somebody did a breakdown and it would cost at least as much as Apple was charging to attempt to make one with the same or similar specs. It was a useful video. Here in contrast there is an implication that to replicate the specs of a Cybertruck it would cost $178K which would require purchasing a separate fast sports car.

I don't fully understand unibody designs but I'm sure Tesla does. I'm not sure they understand 14K+ tow vehicles but Ford does (and Super Duties aren't unibody). It will be interesting to see the difference in the 3 models of truck and how they get to their tow ratings. I can't wait. There will be either 2-3 thicknesses of body panels or the 1M truck will be significantly overbuilt. 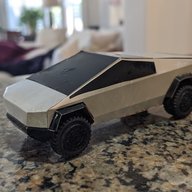 Hey there Todd. I've been following and watching your videos on You Tube. Keep up the good work! Glad to see that you are on this site.

I thought about it again and the Cybertruck is worth at least $200,000+. Because of what Todd said in the video. But also if you want a car with a stainless body (that isn't a CT), you have to buy a Delorean also. They sell for at least $25K. So to get fast you need the Vette, to get stainless you need the Delorean, and to get a truck you need an F150 or equivalent (and generator, integrated ramp, etc).

And now we have to add a laser bar to the top of the F150--whatever that is. Tack on another 10K or so. And since Elon mentioned the CT is going to be 1" narrower than the F150, we have to cut the F150 down the middle and make it an inch narrower. And cut off the mirrors and replace them with cameras. I think the CT is worth over $300K the more I think about it. And we have to add OTA updates and monitoring to the F150. Man. I think the CT is worth over $400K.
OP
OP

fatcat220 said:
Hey there Todd. I've been following and watching your videos on You Tube. Keep up the good work! Glad to see that you are on this site.
Click to expand...

I recognize your username. Thanks.

bfdog said:
It will be interesting to see the difference in the 3 models of truck and how they get to their tow ratings. I can't wait. There will be either 2-3 thicknesses of body panels or the 1M truck will be significantly overbuilt.
Click to expand...

I don't think there is a lot of guesswork or waiting required. It's actually pretty straightforward. Traditional body on frame trucks use up a lot of their payload capacity on the body, glass and bed. It's all dead weight. The Tesla will use all of those components to make the truck stronger with very little dead weight so a much higher percentage of the GVWR will be payload capacity.

Tesla has a lot of engineering expertise and uses all kinds of state-of-the-art structural analysis software to fine tune their designs. They don't guess at how strong each part needs to be and then add some extra for good measure - they calculate the various load paths under extreme scenarios and make the parts as strong as they need to be.

When it comes to towing, the more rigid structure of the Cybertruck will run circles around traditional body on I-beam frame trucks. Such trucks are really flexy-flyers which is why trailer sway is so common. Oscillations are hard to damp once they have started.

Also, don't under-estimate the added stiffness and strength that results from cold-rolling the steel. This takes relatively mild SS and turns it into a much stronger product. Then, by folding and welding it into the Cybertruck 3D shape it further reinforces the rigidity and strength. I think all versions of the Cybertruck will use the same thickness of steel for most of the truck but the Dual and Tri motor versions will have some additional frame components and perhaps a thicker steel in critical areas, not the entire shell of the vehicle.

The hard part is the wheels and suspension. This is where Tesla's structural analysis skills will really come in handy.

I drove twelve hours yesterday (first roadtrip in two years!) and man, I saw so much trailer sway I was thinking the same thing.

Why the Cybertruck is Engineering Genius
2

Article: Here's Why Tesla is Still the Electric Car King