States that love or hate the Cybertruck :) 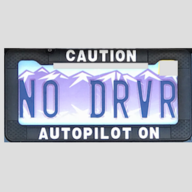 Old Spice said:
Do you agree with your state? I don't! These Are The States That Love Or Hate The Tesla Cybertruck

According to a survey PartCatalog.com did with geotagged Twitter data in the 12 hours following the presentation, more states couldn't stand it than those which were eager to buy one. The company analyzed more than 100,000 geotagged tweets tagged with #cybertruck. According to them, messages such as "I hate it" prevailed in 31 states. The ones that celebrated the pickup truck were a majority in only 19 states.

The West Coast and Northeast states had the most favorable views. Surprisingly, there are traditional truck markets in which it did really well, such as Illinois, Missouri, Lousiana, Alabama, Utah, Wyoming, and Colorado.
Click to expand...

Yeah but this is based on Tweets. I wonder how the state-by-state distribution really looks based on the supposed 850,000+ preorders by now?
Advertisement
Life is short. Live Tall.

And as we know lots of people came around to the looks of it shortly after the the reveal and after the 12 hour period. There were probably people who didn’t want to reveal that they were liking it more and more for fear of being ridiculed! Haha

Frank W said:
And as we know lots of people came around to the looks of it shortly after the the reveal and after the 12 hour period. There were probably people who didn’t want to reveal that they were liking it more and more for fear of being ridiculed! Haha
Click to expand...

Maybe somebody will go through the work of identifying the most- and least-Tesla-friendly states. At one end of the list would be states that outlaw new-vehicle sales except through dealerships. (I was surprised to read that one such is Texas. How do residents of such states buy Teslas?) At the other end would be states that contribute toward the cost of an EV purchase. (Do some states encourage/discourage the installation of Tesla charging stations?)
Last edited: Sep 2, 2020 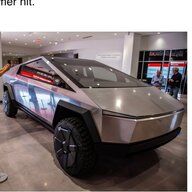 rharl said:
South Carolina here and yes a very traditional,state so cyber truck will not be welcomed w open arms until they see it
Click to expand...

I live in SC as well and I’ve reserved a dual motor. I believe it’s gonna take some time for these die hard Ford, Chevorlet and Dodge truck owners to catch on to what the Cybertruck has to offer. The CT is definitely gonna catch their eyes though! Can’t wait for mine.

Ohio here. I can see Ohio hating it, but that makes me like it more because it'll be more unique. A lot of traditional ICE trucks.

"... most men only want to drive a truck to look tough, macho and manly."

That calls for another factory accessory: a set of swinging bull bollocks to hang from the back![/QUOTE]
Last edited: Sep 2, 2020

Ehninger1212 said:
Most people i know here in Texas dont like it because they say " that doesn't look like a truck". This is because most men only want to drive a truck to look tough, macho and manly. Of all the truck owners i know my father is this only one who is constantly loading that thing up on weekends and doing work. He actually prefers sedans, but knows he NEEDS a pickup. I have even heard a guy with a lifted, 4WD Z71 say he didnt want to get his truck dirty when talking about driving it on the beach.

This is a problem in Texas, Pickups are everywhere... just to fill ego's of insecure men. Really funny, and really funny to watch them haul down i-10.. chromed out 24"s shinning... rubber band mud tires howlin and the bed so high they cant even use it and for some reason its a good thing there truck gets 12mpg..
Click to expand...

Frank W said:
Would love it if my state would promote both EV use and solar! The power company that I have to deal with doesn’t even offer off peak hours. I will just have to deal with it and I am good with that.
Click to expand...

The trouble with solar these days is not so much the cost of the panels, but that you need a large area and/or a long time for the payoff. And, as with wind power, the sun doesn't always shine and the wind doesn't always blow.

Don't know if your power company is private or public, but the only internal motivation for them to offer an off-peak reduction is to avoid having to expand their peak-time output.

The problem with solar and wind is storage. I use about 120 kWh per day on average in winter. If the sun doesn't shine on a particular day I must get that from a battery. 120 kWh is 9 powerwalls or about $60,000 worth. That's for 1 day of overcast. For 5 days we are talking $300K worth of batteries. Of course if that kind of weather rolls in we would shed loads or go to generator.

I used residential scale here but at grid scale the situation is the same: the thing holding back renewable electricity is storage.

While I only have a basic concept of the situation I do realize that I wouldn’t consider solar by itself without a storage option. I saw something this morning that caught my eye and wanted to know if you are familiar with the update? “Virtual inertia capabilities”

Wisconsin here. I can see it not taking off too much right away. There are plenty of jacked up ICE trucks running around. I would like to see more charging areas in WI and I'm sure it will get there. I recently went live with solar. I put a 15.7 kw system in. The production has been outstanding. I use a lot of power with my companies offsite storage sitting in my basement. The solar over produced 500kwh last month. What sucks is that my electrical company only pays 3 cents a kwh and charges 11.6 cents. Then they tack on a service charge of 50 cents a day. I still had to pay them 3$ with also giving them 500kwh of electricity. Crooks!! Hopefully that will all go away when we get a Y for my wife in March and a CT for me. Can't wait!!!
Advertisement
You must log in or register to reply here.
Share:
Facebook Twitter Reddit Email Link

Article: Love it or hate it, Tesla’s Cybertruck is revolutionary

Did anyone notice that the original cybertruck tease was different from the actual truck?

Who would love to have cold thrust rocket thrusters on the CyberTruck?
2

Elon Musk wasn't sure anybody would buy the Cybertruck. That turned out well :)