Isn’t it interesting that Trevor stated that he plans on making $225k on every garbage truck he sells? I would really think that anyone that is interested in buying one would challenge him on that. As a business I don’t think that was very ingenious however I understand that he was desperately trying to appeal to his investors that it’s going to be a profitable company.....when they get around t manufacturing. What I love about Tesla is the “hard core engineering“ geared towards not only the product but the machines that make the product. Rather than just following how everyone else is manufacturing something they look at every aspect of the process with brilliant minds. Yes, I am a big fan and I don’t even have one....yet!

That's a great point and something that people need to realize about Tesla. They sell vehicles but they aren't primarily a car/truck company. They have been leading the way, taking the first steps towards something bigger that other companies haven't put the effort to do. I think it's because of Tesla that in the next 10 years. we could have casting machines that make the entire frame of a car with just a few pieces, cars that drive themselves, a majority of car sales being EV, and even other minor details like new types of windshield wipers. This all would have eventually happened, but Tesla didn't hesistate at all, Elon decided he was going to do something and is constantly throwing his own money at new projects.

I'm probably not the only one but I've strongly considered packing up my life where I am and going to work for one of his companies. I'd love to work at Tesla for a few years to work towards getting dual citizenship (Canada/USA) and then work at SpaceX. 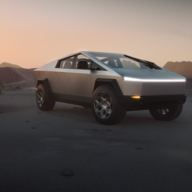 azjohn said:
I used to live in Arizona and somewhat familiar with the area that the factory is being built. Not too far from I-10 and the land is very cheap nothing there. Lucid is not too far away in Casa Grande. Closest "city" is Chandler

IMO employees will be commuting, Distance to Phoenix is about 50 miles nice thing it is minimal traffic
Click to expand...

Cybertruck deliveries based on progress of Giga Texas
2 3