What will it typically cost to recharge a dual motor at a Tesla charging station?

Bill906 said:
I've been wondering something. I've seen many comparisons like this of gas vs. electric costs but not sure I've seen one where they've taken the taxes out of the cost of the gas. I believe most (if not all) states have a gas tax added to the price, and although some states now have an EV tax to attempt to balance this, it isn't in the equation when comparing energy costs. I"m guessing electric still comes out ahead, but also guessing it isn't insignificant.
Click to expand...

But it's pretty straightforward to add to your calculations, if you know your average annual driving.

Bigger problem is the states that have done this fee to urban e-cars and bikes, which generally get used less than 10k a year. A $100 fee on my 5k/yr bike is 2¢ a mile! Compared to my spouse's bike, which uses a hundred gallons in a year, the gas tax had better be really damn high to compare (the average gas tax is under 53¢ all told) to the same fee.


rr6013 said:
How does a Tesla J1772 specification-compliant receptacle not work with CCS?
Click to expand...

The J1772 standard does not include DC pins. The combo connector for CCS contains to additional pins for DC. Tesla repurposes several pins from AC (which CCS isn't required to supply) to DC instead of having additional pins. Very complex to cross the electrical streams! 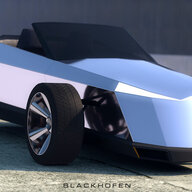 Donno77 said:
What will it typically cost to recharge a dual motor at a Tesla charging station?
Click to expand...

OK, so rather than guess, I'll repeat what Elon himself said, I believe back in early 2020, so maybe do your own adjustment for inflation: "You're going to love Cybertruck because if you go on a long trip and you need to refuel, instead of spending $100 to fill up, you're going to spend around $10. Take your wife to dinner while you refuel, it's on me".
The wording isn't verbatim, but the numbers are.
So, gas has gone up considerably since then (Ukraine, etc.) and so has electricity. Assuming a similar ratio of 10 to 1, you're staring down the barrel of a 90% savings. Not bad, if you ask me.
Wrap it up, I'll take it!

What if a Cybertruck and Tesla Semi Marry
2

Towing to charge a Tesla
2

Problem Solved. Charging with a Trailer!

Poll: What will you tow with your Cybertruck?
3 4 5

Cybertruck Will be a Towing GOD - Part 1: Torque (Newest Video)
2 3